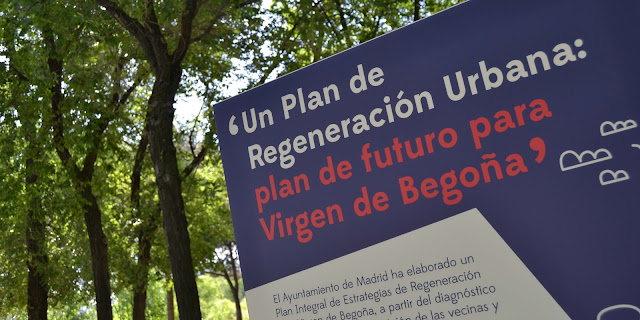 Virgen de Begoña is a neighborhood situated in the Fuencarral-el Prado district of Madrid, to the north of the city center.  It was one of more than 200 areas identified by the municipality for priority zones of intervention due to a state of deterioration. Many of these areas are characterized by shoddy building quality, lack of appropriate urban services and infrastructure, a poor demographic and socioeconomic makeup, and limited economic activity due to this urban fabric, leaving them vulnerable to decline.  The isolation of Virgen de Begoña in particular, with borders formed by transit and infrastructure on all sides, made it particularly susceptible deterioration.
Our project in Virgen de Begoña began in February of 2011, with the aim of restoring, revitalizing and updating prior processes of participatory urban regenerationprevalent in previous decades. Stemming from a district meeting where problems of noise pollution, mobility, and accessibility were raised, the Begoña Neighborhood Association proposed a participatory process in response to these demands and to reinforce a neighborhood identity. Our team started on the sidelines supporting informal neighborhood meetings that served as a platform for neighbors to voice concerns and this mobilization built confidence in the residents to take on the process. 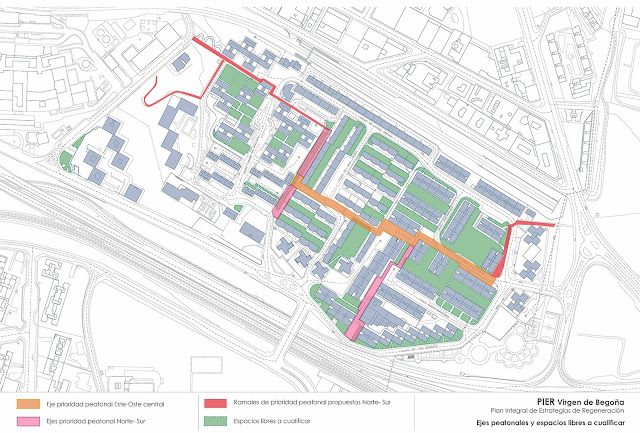 In order to stimulate initiatives that involve residents in participatory and democratic processes, the first step is dissemination – part of our DCP methodologythat focuses on outreach, engagement, and communication within the community. Galvanizing community involvement is integral to the bottom-up process, and so reaching community members from the beginning is essential. By connecting with the existing neighborhood networks in Virgen de Begoña, we helped to identify existing problems as well as current assets or potential assets. Additionally, we created a blog for the project as a digital hub for information sharing and as a tool for supervision of the project, maintaining transparency and accountability. The blog contributed to strengthening community identity in a graphic way as well, through a logo which served to represent the regeneration project (the project was branded VdB and this abbreviation served to identifythe reactivation project).
The Neighborhood Association was a crucial jumping off point, as it was an existing network and means of reaching community members. As mentioned in the previouspost on InPar, capitalizing on existing networks is a key strategy to reach residents. As the first phase of VdB was taking shape, the idea to revive the neighborhood party (which hadn’t been held in more than 30 years) came to light.  Benefits of having a neighborhood party were fourfold: 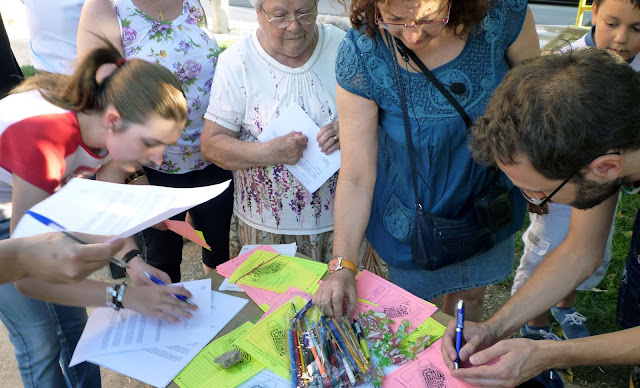 The neighborhood party shed light issues of management, established a base of participation from which to build, and, through our guidance, helped form three strategic themes for the project for the second phase. These three themes were the need to maximize public space (evidenced by the block party’s use of open space between blocks – a potential asset), economic reactivation (to translate the residential neighborhood into one of diverse activities), and urban edges(addressing the neighborhoods geographic isolation based on its borders).
The identification of these themes and application of our participatory indicators aided in developing and prioritizing activities. For example, the economic reactivation theme led us to do a collective mapping exercise, which had both digital and physical components. And the activation of public space theme directed us to develop a collaborative design workshop between neighbors and experts. One outcome of these activities was a proposal to activate inter-block spaces to provide public space and improve mobility for pedestrians, and especially for disabled residents. 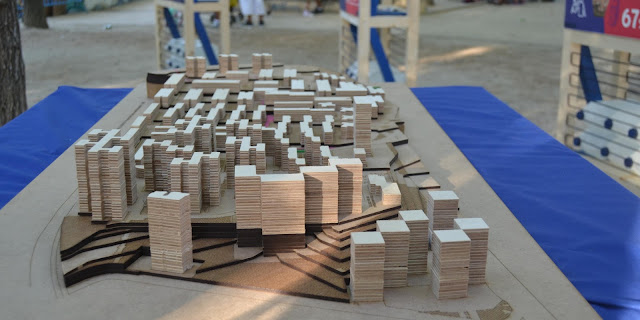 Over the course of the second phase of VdB, together with the residents we drafted a neighborhood plan to submit to the municipality with proposals on employment and innovation, identity and culture, integration and social support, and participation and associations. The resultant plan ended up a bit less comprehensive and integrated than desired due to the structure of the intervention program of the municipality; nevertheless the plan, created by and for the residents, was approved by the municipality in February 2013, two years after our work with the neighbors started and demonstrates the potential for bottom-up processes.
VdB activities involved various other stakeholders from the government and private sector. Bottom-up processes don’t exclude these stakeholders, but rather, include them via the leadership and organization of residents, through collaborative processes.  Part of our role is to facilitate these relationships and build communication, trust, and confidence between them, and to help translate citizen remonstrations into proposals and interventions to improve neighborhoods. The activities of VdB are a reflection of our DCP methodology and introduce new intersectional prototypes for participatory processes. They demonstrate what cooperation between stakeholders, that involves and is understood and advanced by residents, looks like and how these different groups can find synergies and common ground. Though our active role in the project has ended, VdB continues as an evolving, ever-changing project, adaptable to meet residents’ needs and try out new ideas, evincing the beta permanenteconcept.
This June, four years after their inaugural block party, the neighborhood held their 5thannual party. They now have a community garden and host outdoor film screenings in the summer (cine de verano) too. The Neighborhood Association continues to lead the efforts to engage the citizenry in the activation of their neighborhood. They had their own blog before VdB began, which they continue to maintain to share news and events with the community; but since reinvigorating community efforts through VdB, blog posts have increased more than tenfold, reflecting strengthened resident engagement, increased neighborhood activities, the importance of digital tools in communicating and information sharing, and growth in conversation about what is happening in their neighborhood and as part of a conversation about neighborhood revitalization around the city. 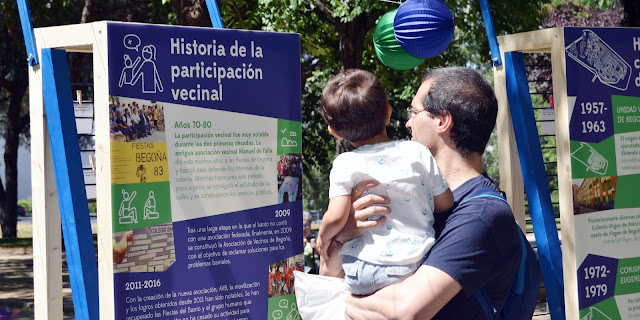 Through VdB, we hope to show the capacity of bottom-up initiatives to transform the physical, environmental, and social reality of the neighborhood; to prove that citizens can be the protagonists of neighborhood revitalization; to conjecture that a different model than the dominant top-down municipal efforts is possible – but it requires a different methodology, a different way of analyzing and developing plans, different tools, and different relationships. We put forward a model that is adaptable and flexible – context specific – that responds to the needs of a locality. Whether updating tried-and-true practices (like neighborhood parties) or coming up with creative new ideas (like the “Recuerdos y deseos” workshop), by incorporating modern tools such as ICTs, thinking critically across disciplines, and invoking the voices of the citizenry, neighborhoods can be regenerated and resident well-being improved from the bottom-up.


For more information about #VdB

We are available in english too!