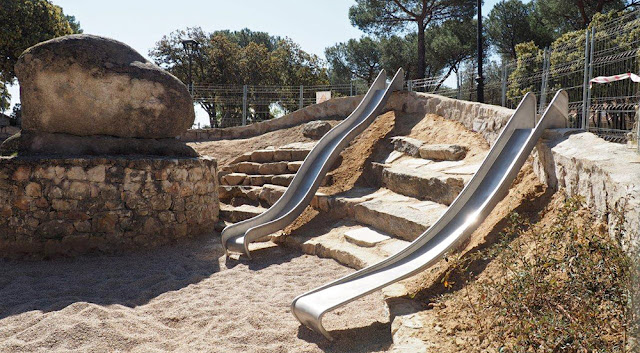 In 2012, the local government of Torrelodones, in collaboration with the Architecture Chamber of Madrid, announced a design competition to renovate three of the municipality’s parks. Their goal was to enhance these parks through reforestation and re-planting actions, while rehabilitating some of the existing buildings in theses publics spaces. These improvements would boost and complete these spaces with with new equipment and furniture, offering a renovated and higher-quality service to the community.
One of these three parks was the Parque JH (JH Park). The JH Park is located to the northwest of Torrelodones’ downtown area. It is one of the largest public spaces of this municipality, with an extension of more than one hectare (12.000m2). The park has a trapezoid shape and a height difference of approximately 8 meters between the northeast to the southwest edge. This slope is compensated through various terraced levels inside its boundaries, which are surrounded by a stone perimetral wall with several entries. In the interior the park’s design is picturesque, with ornamental elements built in stone, such as fountains, tables, benches, ponds, and other unique elements, that contribute in the creation of a singular look and the space’s own identity.
By the time the competition took place, it was clear that the park needed an intense renovation. Of all the submittals, the selected project focused on improving the perimeter in order to have an impact on the connection between the park and its surroundings by upgrading the the relationship between the exterior and interior. However, despite the fact that the winning proposal was an interesting design it did not relate closely to the neighbors’ concerns and necessities. Therefore, undergoing a participative process with the community, which has previously been proved successful, a revised version of the original proposal was designed. Paisaje Transversal was asked to implement the revised design, with the aim to renovate the public space, in which anyone that was interested in participation would be able to do so. 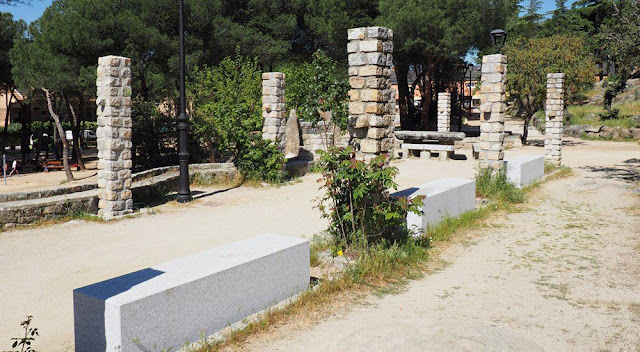 The collaborative design between professional agents and neighbours, was intended to point out some of the problems that affected this public space. The communities awareness of the park’s issues made it possible to adapt the design in order to respond to these needs. During the whole process, consensuated decisions were made toward achieving the best possible solution for the space, in a way that everyone could enjoy it. It was crucial to ensure the involvement of a diverse group of people in the decision making process. For this reason, the neighbours were encouraged to participate, as being involved would make them feel as if the space was their own, and encourage caring for the space once completed. The actions focused on providing a space that could be enjoyed and used by different social groups. But, at the same time, the solutions should minimize the care and maintenance of the space in the future, as these two aspects would reflect in the neighbours’ satisfaction.
It is important to point out that the during the proposal and participative process’ development, a huge effort was made to keep the budget as tight as possible, as the economic situation in Spain at the time was in a critical stage. The problems were addressed while reducing the execution costs through key interventions that would make it possible to have a large impact using minimum resources, and being conscious of the the necessity for cost saving.
In order to achieve an understandable process and promote the participation of anyone willing to do so, the analysis was based on three fundamental ideas. These three concepts identify what makes public space design successful: accessibility, the image of the space and the activities hosted in it. Paying attention to these aspects would assure that the space would be dynamic, comfortable and attractive to the users.

Accessibility was one of the main concerns from the beginning. The park suffered from a lack of entrances as it was surrounded by a perimeter wall. The importance of a nice connection between the interior and the exterior is vital to any public space’s connection with its environment, both visually and physically it is key to permit people the ability to reach and enjoy the space. For this reason, one of the actions taken was to increase the number of accesses to the JH Park, connecting the Francisco Sicilia Street and the Conde de las Almenas Avenue. Consequently there will be nine door-entries, plus the two without gates in the Julio Herrero Street. The new opening will provide the space with a longitudinal main trail, this new path will improve the connection of the park with the neighbourhood, and the public transportation will be able to facilitate adequate accessibility to the area.
As was previously indicated, in urban planing a place is considered successful when it is comfortable and has a nice image. The comfort concept requires the space to be safe, clean and offer enough seating area. This distinctive character will result in recognizable space and a community’s feeling of belonging. To consolidate these ideas the actions were targeted to repair, rehabilitate and ensure the preservation of some of the ornamental elements built in stone, which give the park its unique appearance. The idea was to bring back to work some of the fountains inside the park with new filtered water supplies, due to the fact that the lack of drinking points was pointed out as an issue by the neighbors. Simultaneously, some of the sculptures would be cleaned to remove graffiti vandalism. Another action that would have a large impact on the look and feel of the space was through planting. Low height plant species will be reinforced with scrub species that will contribute to improve a walker’s experience of the space. These smaller species will easily adapt to Torrelodones’ climate in order to reduce the maintenance of the park. Despite the new plantations need for some irrigation support in the beginning, the goal will be to achieve a self sufficient vegetable ecosystem in the future.
Finally, the activities and uses are the foundation for any public place. Before the competition was released, the JH Park did not offer proper activities, and therefore some of the recreation areas remained empty. During the participative design process Paisaje Transversal, in collaboration with the community, made an effort to conceive an activity schedule, that would integrate as many different social groups as possible. An action that has been taken was to complete seating areas to include more benches and tables. Some of these areas will also be more accessible after the new accesses are open. Beside these seating areas, the park will be complemented with four spaces for four specific uses such as a sport and rock-climbing area, a children’s playground, a slide zone and a dog area. The goal was to achieve a more diverse environment to respond to the community’s needs. The fact that many social groups can enjoy these new space will make the park a much more gratifying space, and this will also establish a greater sense of belonging within the community. 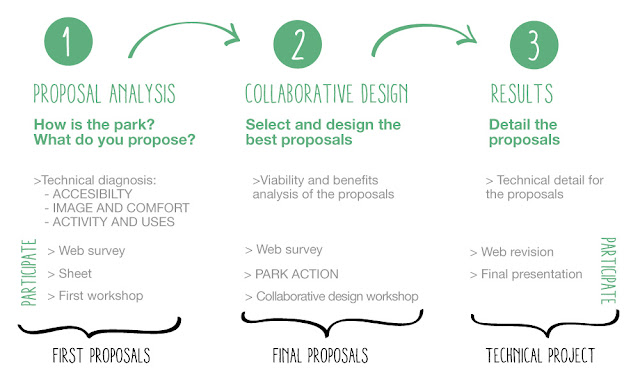 During the whole design process Paisaje Transversal has made it possible to reach a greater understanding of the park’s issues and potential through the collaborative process. Awareness of the opportunities and the problems have provided an exceptional opportunity to take advantage of the existing conditions in order to improve the park through rehabilitation and reuse actions. Its traditional and distinctive elements have been used in the proposal to create brand new possibilities, making the space useful for as many people as possible. Applying creativity in the design process, in parallel with the community involvement has permitted a broader approach to achieve a good quality design. The work began last October and after a successfully development, they have recently concluded, so very soon a brand new and nicer public space will be given back to Torrelodones.
The renewal of the JH Park is a perfect example of how a collaborative process with community involvement proves to be a great approach for any public space’s design development. These kinds of projects, heavily based on exchanges between professionals and users, lay the foundation for appropriate and recognizable high-quality spaces. In this particularly case, the intervention to renew the JH Park, was the result of the information crossing between the participative process and the conclusions extracted from the technical diagnosis. The process was a success mainly because it was circumscribed to strictly necessary actions, since the neighbours’ desires enhanced and complemented the previous park’s design without transforming the essence and uniqueness of the space. 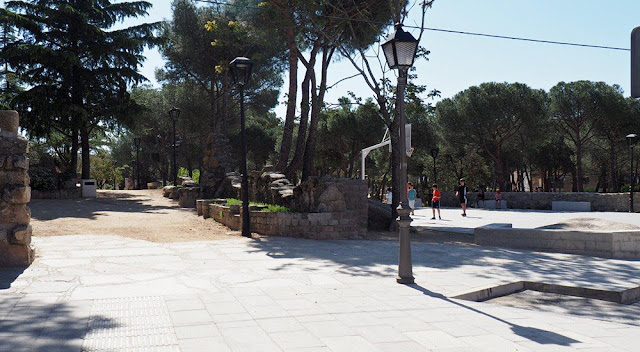