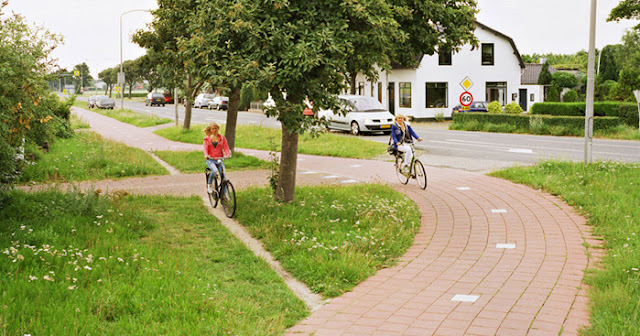 In the image above, the girl on the right side follows the bike lane, that bends for some reason. The girl on the left decides to continue straight, out the lane, but the clearing in the grass reveals she is not the first to do so. The spontaneous paths created as a consequence of foot or bicycle traffic where there was no road or sidewalk are called «desire lines» or «desire paths». In Dutch they are usually called olifantenpaadjes (elephant paths) and in French chemin de l’âne (donkey paths). I have seen in many articles and lectures that the term was created by the French philosopher Gaston Bachelard, even that he used it for the first time in his book La poétique de l’espace. But there is a discussion about this attribution and I could not find it in the original book neither. Despite the origin of the expression it is a very useful concept to study people in public space.
We can easily observe them in the natural areas, for instance when people take shortcuts to the sinusoidal paths that go up to a hill. It is more difficult to see the actual lines in the city, where the hard pavements cover most of its surface. Albeit they are there, visible or invisible. We can see them with our bare eyes when there is grass, soil, sand or when it snows. Or if we look closely when there is mud or dust that make our footprints show up in the asphalt and the paving stones. And even when we can not see the traces we have tools to record and represent it. Jan Gehl, an architect famous for his studies about public space, encourages the use of these techniques (see Gehl & Svarre, 2013), either tracing the lines or looking for traces.
In the natural parks pathways are often draw to dissuade visitors to step on areas where their presence would damage the terrain, the flora and the fauna. In the city people (and vehicles) are driven for security purposes: to prevent accidents, congestion,… From the design point of view I would say there are two strategies to do so: a soft one, inviting and suggesting a certain route, and a hard one, blocking and prohibiting all the rest. Landscape architects use different tricks (landmarks, information panels, benches,…) to keep them people on the road. When this is not enough, fences, walls, canals and trenches are used.

Urban designers constantly employ subtle techniques to separate and lead different kinds of traffic. A color or material change might be enough. A small level difference, like the kerb or speed bumps. Lines, arrows and words painted on the floor. In Amsterdam a simple ceramic tile is able to avoid people park their bikes where they are not supposed to. When things get more complicated, specially when it involves motor vehicles, traffic signs are needed, as well as bollards. Finally, if we definitely want to keep people out we would use fences and walls. Its height will tell us how badly we want to avoid people breaking in, like the barriers separating the train rails are taller than the few ones protecting some tram rails. Here we stay in the material level, but obviously there are many laws (more and more) regulating public space as well, and actually some of these objects are its representation.
We can see these mechanisms the soft mechanisms at Jonas Daniël Meijerplein. If you are biking the North side of Nieuwe Herengracht, once you reach the square you are «invited» to get off. The street pavement stops and small gravel covers until almost the border with the water, making it unpleasant and harder to bike, but most people still do. When you arrive to Weesperstraat you will find no zebra crossing, no traffic light, not even a ramp to come down from the pavement. But still, people bike through Jonas Daniël Meijerplein. You can easily recognize the traces in the gravel and you do not have to wait more than five minutes to spot a disobedient. Sometimes ethnographer’s work may be not very distant from a biologist in the forest, looking for footprints or waste to understand the animals.
While doing the observations I realized that there is another way to find these desire lines: looking for the obstacles employed to prevent these routes. In the movie by van der Burg (2011), the alderman for Environmental Issues in Leusden shows how they dug a «anti-tank ditch» (sic) to block a path that people was using. People continued to use it, climbing the dike, and finally a path was created. First public resources spent to prevent people’s will and finally more resources spent to do what they are (silently) asking for. In the same movie an architect suggests that in construction some budged should be saved to improve the space after its opening, based on people’s use. Or as the cooperative of architects LaCol (2013) propose, spaces should be seen as unfinished projects, always evolving.
Amsterdam does not use much fences to arrange the public space, but I came across some that are hard to justify. One of them is placed in the bridge over the Kostverlorenvaart next to Surinameplein. If your intention is to continue walking or biking next to the canal you won’t have it easy, no matter your way of transportation. You will have to make a long cut to one side or the other to find your way to cross the street. Not only there are no zebra crossings, but a railing would block you to do so. Only on the East side bikes are allowed to cross, without any logical explanation that would explain why. 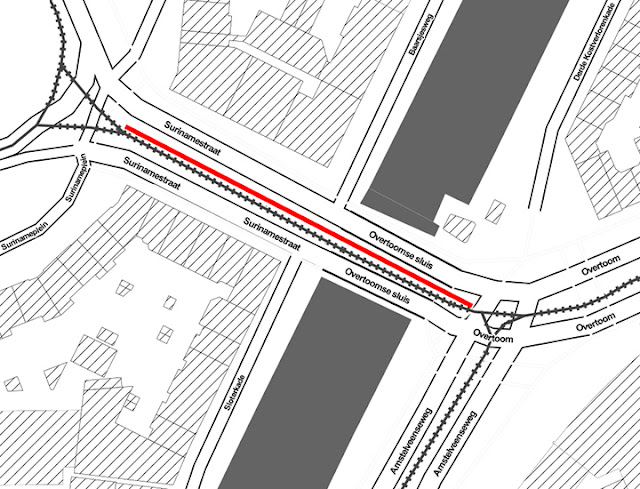 The railing is actually broken at one point that matches exactly with the crossing if you want to continue Baarjesweg-Amstelveenseweg. My first idea was that it would be a case of DIY urbanism, and I pictured an annoyed anonymous citizen sawing the pipes in the middle of the night. A quick query to the historical images of Google Streetview took apart my romantic theory. At least until August 2009 the space was occupied by a traffic sign reinforcing the fact that cars can only turn right at this point. On the May 2014 image the post has disappeared, reason unknown. It could have been still an angry neighbor, but also a car accident or just the lack of maintenance.
Whatever is the explanation of the disruption in the railing, the fact is that the aperture is there and it can be used as a gateway to cross the street. But in my observation I could not see anybody crossing it (besides me). One explanation is that the aperture is not big enough for a bike and there was very few pedestrians in the intersection, most of the people who were potential users were biking.

In the same intersection what I did observe was the fact that people bike against the traffic to cross the bridge when coming from the Baarjesweg. It actually was the majority of the routes and even a policeman in his motorbike crossed contraflow. In one hour observation I only saw two people getting off the bike to do so. On the other side, when coming from Surinameplein, if you want to turn left to take Derde Kostverlorenkade, you also have to choose between biking a little bit more or use a zebra crossing intended only for the other sense. This creates small conflicts among people, since you do not have any traffic light to know when you are able to cross and there is no waiting space for those not following the rules.
Even if the disruption is not that big, there is no apparent reason for urban designers to block this crossing. One explanation would be to improve the car flow from Overtoom and Amstelveenseweg to Surinameplein. But a zebra crossing would cause any inconvenience to cars if the traffic lights were well coordinated.
My observation in this intersection was only one hour one morning during the weekdays, and without precisely counting how many people was doing what. But Te Brömmelstroet (2014), using the tools from the danish studio Copenhagenize (2014), has recently traced almost 20.000 cyclists movements in 9 intersections in Amsterdam to analyze their behavior. This kind of studies could improve our cities by making bike lanes safer, but they can also break some prejudices, like the often heard image of Amsterdam rogue cyclists. In average 87% of the cyclists conformed to all rules, and 7% are «momentumists»: cyclists who follow their own route and adapt certain formal rules to suit their own ends, without causing any dangerous situations or conflicts.
The desire lines could be compared to De Certeau’s (1984) tactics. A group of unorganized citizens using «the art of the weak»: creating paths just walking or biking again and again on the same place, facing the strategies that were decided for them. Everyday small acts of resistance challenging the powerful, those who use machines, technical skills, resources and authority to impose their vision.

We are alvailable in english too!