New Urban Activism in Madrid: The Philosophy Behind it All

• 1176 Views • No hay comentarios en New Urban Activism in Madrid: The Philosophy Behind it All
by Erin Johnson and Paisaje Transversal 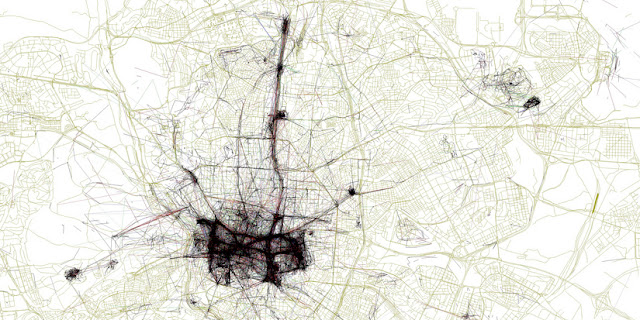 Whether they see themselves as activists or not, participants in the grassroots groups are part of the social movement, engaged in a conversation and activities to redefine the urban landscape. The urban activists are responding to myriad urban problems and represent a range of interests.
Tying them together is a shared approach to addressing the problems, a philosophy that is generating new theories on urbanism – on who should make decisions and how, on what should be done and why. This emerging discourse is occupying an ever-more prevalent place in the arena of urbanism.
The Information Age
A major influence on this new urban activism is technology. ICTs are an integral element of the functioning of activists. There was much talk of how Tahrir Square protests were organized using social media, and Spaniards had been using ICTs to organize even before the Arab Spring. Ubiquitous access to these technologies has allowed for «fast, decentralized and anonymous ways of disseminating information to spur mobilization»,[1] whether as immediate calls to action for protests or for ongoing efforts. In this era characterized by private lives and individualization, by communicating on the web, groups can take action on the streets. The role of ICTs in social movements is not only limited to mobilization but also has structural impacts on «the organization, reach, and process of formation of social movements».[2]
Since the early aughts, Manuel Castells has cited the role of the Information Age in changing the way we organize. He theorized on the generation of networks through ICTs both of related activities in different geographic areas («spaces of flows») and distinct activities in a shared geographical area («spaces of places»).[3] Through both types of networking, social movements are simultaneously hyper-local AND global, spatially concentrated AND decentralized – speaking to local urban issues and global influences.
In regards to spaces of places, ICTs have provided the capacity to unify diverse groups within a locale. Dating back to the Spanish social movement of the 1970s, Castells posited that «demands cover a wide range and, in a way, are the most clear indicator of the urban crisis» – that by recognizing «internal diversity», activists could understand that «the popular interests coincide» and by recognizing and acknowledging each other, they could unite in their fight.[4] Now with a modern technological twist in today’s movement, wide ranging heterogeneous interests are united through networks enabled through ICTs. Sociologist Andrés Walliser notes that this new urban activism «represents a new paradigm in relation to urban social movements since they are not formed around organized structures, but rather as a constellation of groups with a virtual logic that allows them to operate at the neighbourhood scale.»[5] 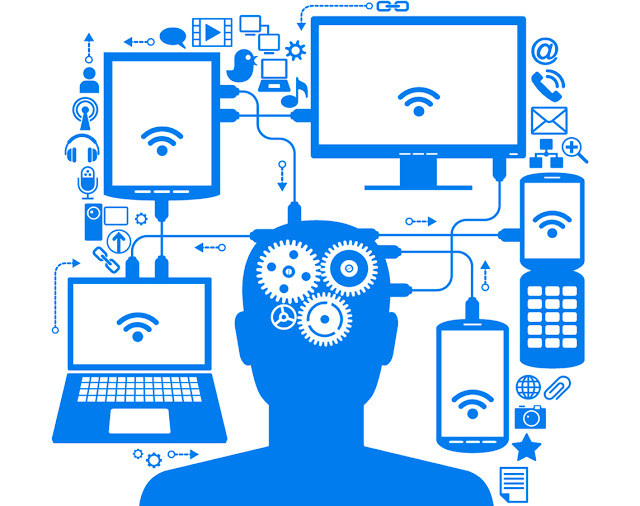 Para y Por
Critical of the prevailing paradigm characterized by corruption, lack of transparency, and top-down development through which the municipality and private sector make decisions governing public space without involving community members, the emerging ideas on urbanism are a stark contrast to the status quo. The tides are turning to an approach that is para y por la gente, for and by the people. Strategies in this new urbanism are centered on participatory, open, and democratic processes – practicing what they preach. Indeed Castells asserts that groups must themselves have an «objectively democratic character» with «dynamic processes of democratic participation»[6] to demand democracy at a higher level. The resultant forms of management and organization are autonomous, bottom-up, non-hierarchical, and emphasize community engagement.
You don’t have to dig very deep into literature on the new approach to urbanism and activism to come across the term autogestionado, meaning autonomous, self-managed. It represents the people exercising their right to the city, a reaction to the failure of the government to provide spaces for citizens. Through autogestión, citizens reclaim spaces and take management into their own hands, participating and sharing responsibilities, becoming the stewards of the spaces they have created for themselves.
Community participation is part and parcel to the new urbanism citizens are advocating for. Following years of urban development that didn’t involve local people, that didn’t give them a say, the activists are now putting this ideology of community engagement and participation to the test. And they are demonstrating how it works themselves, through grassroots groups predicated on openness and active, engaged citizenry that gives them a platform to have a say in the development of a space. Participatory processes also restore value to local knowledge and bring the community with their collective intelligence to the table so it is no longer solely dominated by professionals, policy makers, and corporate stakeholders.
Similarly, a horizontal non-hierarchical structure has emerged as part of this new paradigm. Driven by the corruption and failure of democratic processes when positions of power are part of the equation, the new urbanism puts all players on an even playing field to ensure truly democratic processes.
Caution: Urbanism in Progress
If the sole focus of urban planning is on the product, if the outcome is fetishized, the process is sacrificed. The real users of the space, the citizens, are left out, in favor of the opinions of industry experts and politicians. Too often this has been the case in the past. New urbanism puts the emphasis back on engaging community members in the process, and shifting the trajectory to one in which the process is actually important, not just the end. In fact, it might be said that the process is the most important part.
Although this makes for a lengthier process, it doesn’t mean that nothing happens in the in the meantime. Rather, new urbanism embraces «meanwhile urbanism», the result of what happens when planning become an active process, where ideas, relationships, and innovation emerge out of the process itself. Spaces can become functional in the meantime instead of sitting vacant while master plans are developed or while progress is slowed to a snail’s pace with document approvals caught up in government bureaucracy.

«Meanwhile urbanism» gives rise to another concept that characterizes the new approaches to urbanism: beta permanente (permanent beta). Beta permanente is a concept taken from the free software movement signifying that urbanism is perpetually an open-source work in progress, a trial at something new and improved. The tech sector releases programs and applications in beta form as a way of testing out a draft, a way of employing real world use to figure out the bugs. In previous forms of urbanism, master plans are finalized behind closed doors and then implemented, and there is no opportunity to test out the plan. Embracing the concept of beta permanente, spaces are in a constant state of being tested, of trying out an idea, experimenting, using the space as a laboratory for ideas, seeing what works and what doesn’t, and moving forward. 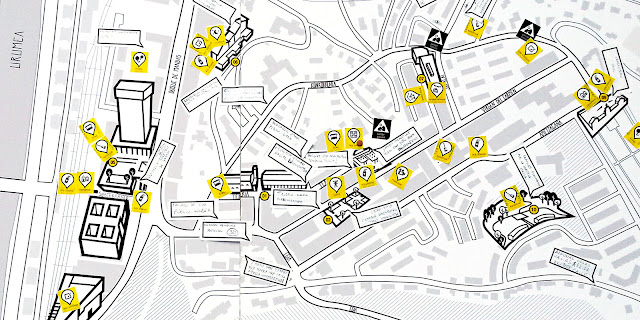 Putting the emphasis on actually doing things in spaces, new urbanism activists act as «do tanks», in contrast to think tanks where immense efforts are put into research. Think tanks indeed generate incredible data and analyses, but there is a large research-implementation divide, with the emphasis on the former. «Do tanks» may utilize this research, but the focus is on jumping into engaging the space and the community. The hold workshops to self-teach, they engage a range of stakeholders to develop interventions that work for everyone, they are open to new ideas.
The City as an Ecosystem
The functionality of the emergent forms of urbanism and activism is predicated on a holistic approach understanding the connections between and amongst people, places, and systems. The approach aims to spread power from the hands of few across stakeholders, disciplines, and scales. By adding in local voices alongside the usual suspects of planners, developers, banks and government employees, the process is enriched by local knowledge. Conversations amongst these stakeholders bring everyone into the picture and build relationships between them for the process to continue.
As mentioned above, new urban activists employ networks to build connections between scales – between the hyper-local and the global, focusing on the community context but also as connected to national and international politics, economy, social movements, etc. By networking with other groups, they are able to be simultaneously connected at both ends of the spectrum. Furthermore, by connecting with other groups and aggregating, they build from the middle out, occupying a space in between the bottom-up and top-down efforts.
By working across disciplines, new urbanism incorporates sustainability by connecting ecological, social, political, cultural, health, educational, and economic interests. These systems are inherently linked in the urban ecosystem and it is a disservice to situate projects solely in one field without considering impacts and connections with others. New urbanism understands the linkages between these sectors of the city and crosses the lines between them, creating projects that have co-benefits.
Praxis
New urbanism theories drive practice, and practice drives the theory; at the intersection is praxis, where theories are enacted and practiced. And at this intersection is where the fourth sector, bridging the public, private, and civil sectors, exists. These social benefit enterprises are commonly formed as collectives that serve as facilitators – implementing, supporting and advancing the ideas of new urbanism.
As described by Paisaje Transversal, they have the «capacity to transform protests into proposals».[7] Castells noted that «The individual and collective support of architects, urban planners, lawyers and engineers, etc., has increased the power of the neighbourhoods, making their demands more securely based»[8] in the 1970s, and in today’s movement the fourth sector occupies a valuable space between the stakeholders, bringing technical expertise, analytical perspectives, and an independent position, giving them credence with communities, private entities, and municipalities. Their strategies and methodologies are based in carrying out the theories of new urbanism in practice.
Through projects and workshops, the fourth sector is able to dig into the complexities of urban problems, recognizing and embracing the intricacies of the history, place, and people of a community. Their unique position gives them an advantage over typical agents of urbanism from the top that more often than not, ignore or simplify the complexities due to limited capacity or understanding of communities. These projects and workshops engage the citizenry to work from and build community knowledge, empowering them in processes in which they have typically not been included.

Second part of this article:
New Urban Activism in Madrid: Boots on the Ground