New Urban Activism in Madrid: Boots on the Ground

• 1484 Views • No hay comentarios en New Urban Activism in Madrid: Boots on the Ground
by Erin Johnson and Paisaje Transversal 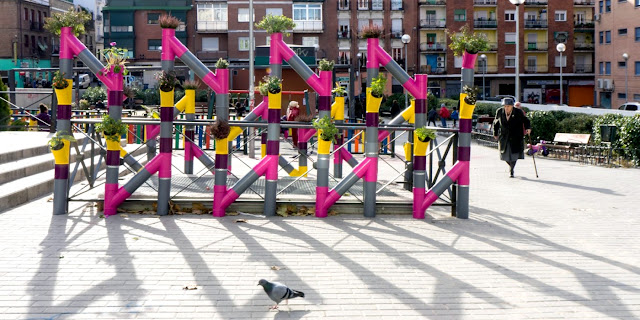 The recent election of a mayor from the new Ahora Madrid party,[1] Manuela Carmena, makes it quite clear that the urban social movement in Madrid is having a profound impact on society. Through consistent engagement and organizing of citizens and a clear message, the bottom-up movement has gained enough power to take City Hall. The election is a major gain for the movement and comes on the heels of years of tireless work by grassroots groups trying to create a new urban reality.

As described in the previous post (you can read it here), the urban social movement is driven by los indignados who demand a government that serves its citizens first instead of the private sector, calling for a transparent, participatory democracy that provides public space, protects social rights, and ensures ecological and economic sustainability. Within the past decade, hundreds of associations have formed to take on a particular struggle, such as evictions, or to serve their local neighborhood, from the city center to the fringes of Madrid, all part of this movement. Some occupy vacant sites illegally and others have convinced the municipality to turn spaces over for social or cultural uses. They rely on the free time of those involved to stay organized. Many are part of a network of groups or projects. Together they form a rich and complex yet cohesive landscape of active citizens. This post will delve into who some of these groups are, what they do, and how they do it.

With the bursting of the housing bubble, countless vacant properties dot the cityscape – both empty lots and abandoned buildings. These neighborhood blemishes are being turned into opportunities for activation, to bring about something positive, to make an accessible place for the community.

One of the most visible sites where this is taking place is Campo de Cebada in the heart of the city. Adjacent to the Cebada Market and across the street from the La Latina metro stop, this outdoor space is the result of the tearing down of a sports complex in 2009 and sat empty due to the economic crisis. Following La Noche en Blanco [2] in the space and a subsequent installation in 2010, neighbors wanted to continue using the space for the community, especially since the city was supposed to replace the sports complex with another public space. They organized to discuss how to manage and use the space and to negotiate with the city. Though there were challenges figuring out the management between the city and residents, they eventually reached an agreement. Over the last five years, the space has been transformed through collaborations and projects with artists and architects and is now filled with murals, mobile structures for seating and shade, a garden, and areas for sports and performances. The space hosts all sorts of free, open events – workshops, fairs, a basketball league, festivals, concerts. Members of the community share unlocking and locking duties every morning and night and signs around the site let users know that it is self-managed, users are responsible for keeping it clean, and meetings are open. It is a bustling space, popular with the youth but full of people from all walks of life. Architect David Bravo Bordas notes that «Administrators would do well to take note of its spontaneity, challenging the official channels with a committed initiative notable for its transparency, participation and social inclusion.»[3] 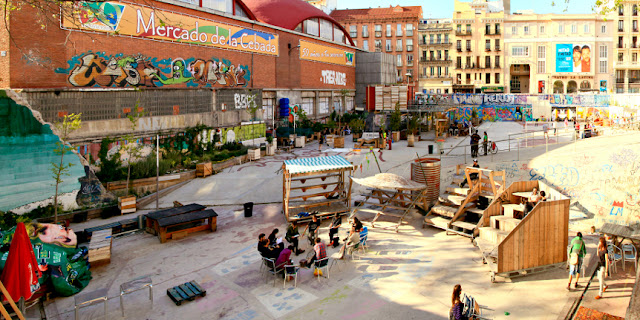 Another unused space around which community members have rallied is the Mercado de Frutas y Verduras de Legazpi, an old, vacant fruit and vegetable market in Arganzuela on the south edge of the city center. In September of 2014, 70 community members from various neighborhood groups met to discuss a joint project of community programming in the market and formed Espacio Vecinal Arganzuela (EVA). Since then, they have laid out a plan, including more than a dozen proposed projects including dance, arts, gardening, a food cooperative, a cinema, and more. The city, who owns the market, has other plans for the space: privatizing it and filling it with a spa, fitness center, and shopping - uses that would certainly generate economic profits, but which do not meet community needs. EVA continues petitioning the city and has presented a 20 page plan outlining the justification, uses, and management plan. While they still do not have access, they’re coming up with creative ways to do whatever they can. They recently converted a tiny strip of land alongside the market into an urban garden sprouting lettuce, zucchini and tomatoes; and they host film screenings, projecting the films onto the outside of the building and using the adjacent lawn for seating.

In addition to these two examples are dozens if not hundreds of other groups also working to reactivate spaces to serve their communities. Still battling the municipality is Patio Maravillas, which developed out of an abandoned building and is home to numerous community groups. After multiple evictions and threats of eviction, they are now onto their third building. And then there’s La Tabacalera: a former tobacco factory that sat empty, the community fought for 10 years to gain access to the space for public use. Now it’s run by the Ministry of Culture with part of the building housing contemporary and visual art exhibits through Tabacalera Promoción del Arte under the Ministry, and the rest of the space ceded to Centro Social Autogestionado La Tabacalera, an autonomous, community-managed social, cultural, and arts center. And down the street from La Tabacalera is Esta es una Plaza which rebounded after being bulldozed by the municipality and continues to serve as a lively community space with a garden, weekly bicycle workshop, children’s play area, theater space, and plenty of seating and shade for meetings, socializing, and relaxing, but after five years still has not been able to reach a legal agreement with the city. These snapshots provide some insight into the types of groups, what they are doing (or trying to do), and both the challenges and successes. 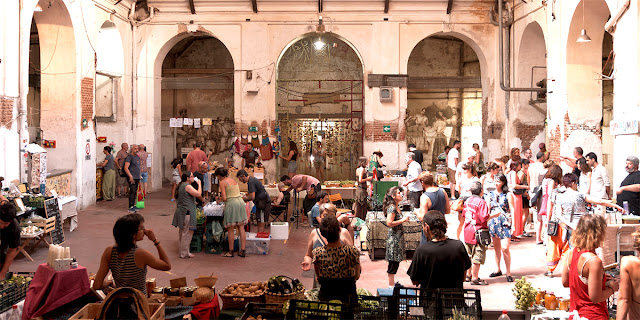 Common challenges of citizen-led efforts are limited capacity (time, technical knowledge and skills, manpower) and burnout. But through networks and collaborations, they are able to not only alleviate some of these issues but also have a bigger impact, by sharing resources, best practices, and ideas; coordinating events; and presenting a cohesive front. Networks may be based on type of activity (food cooperatives, urban agriculture, 15M groups) or by locality. A few examples follow:

La Red de Huertos Urbanos de Madrid (ReHd Mad - Madrid Urban Agriculture Network) formed as a network of urban agriculture groups, as a means of mutual support, knowledge and tool sharing, and as a means of connecting decentralized entities to meet, organize, and communicate. Today, there are more than three dozen huertos urbanos across Madrid, each conducting their own activities and maintaining their own spaces; the network brings them together. Be it advice on problems with plants and access to water or a collaborative bike tour of huertos in an area, the mutual support of the network both helps each of the huertos urbanos function individually and gels them into a cohesive collective connected to the larger movement. 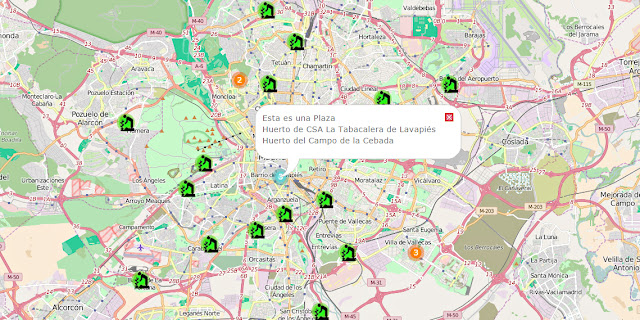 Based in the neighborhood of Tetuán, Paisaje Tetuán represents a union of projects and sites aimed at beautifying the environs, providing opportunities for community engagement, and reclaiming spaces around the neighborhood. Actually an initiative born out of the municipality to improve the landscape of neighborhood, in partnership with Intermediae,[4] it manifested in multiple phases of projects creating huertos urbanos, plazas, and urban art. This multi-pronged approach has enabled Paisaje Tetuán to build relationships with multiple other groups, to explore a variety of interventions, and to provide a means for community members to shape their neighborhood.

Another way groups are connecting is through collaborations with collectives of artists, architects, engineers, and planners working with grassroots groups to help them design and create spaces that serve the community. These collectives will be explored more in the next and final post of this series.

First part of this article: