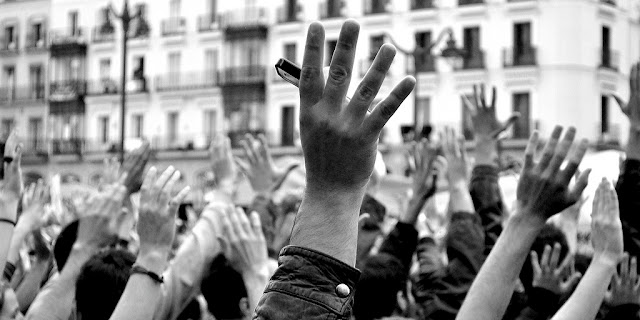 The economic crisis in Spain receives regular coverage in international news – there is ongoing commentary and analysis about trade, austerity measures, unemployment, implications for the Euro, and even talk of emergence from the recession. But the conversation tends to focus on the financial situation, and not the state of affairs in which years of problematic governance has left Spain’s citizenry.
The stories that don’t make it across international borders so much are the efforts of the folks on the ground, working in their communities from the bottom up to transform the urban landscape. Like any city, Madrid has its share of challenges; the impacts of globalization and neo-liberal policies, among other political, economic, and social forces, have resulted in a government characterized by privatization, bureaucracy, and top-down strategies. This status quo is what they are fighting against and what they demand is a transparent, accessible, participatory democracy that responds to the needs of its residents. Their innovation, use of modern tools, and focus on engaged citizenry is remaking the field of urbanism into something that serves citizens better and prioritizes public good over private gain.
This series of posts will provide an overview of this new urban activism and the urban social movement in Spain, focusing on Madrid. To start is an introductory post providing the historical, economic, social and political context from which the movement and strategies emerged. Subsequent posts will highlight some of these grassroots groups and the way they function, the emergent discourse in the field, and the ways the fourth sector is facilitating relationships between stakeholders to support and advance a vision of a new urban landscape.

How did we get here?
Spain’s democracy is fairly young – 2015 marking 40 years since the transition began following the death of dictator Francisco Franco. King Juan Carlos I took the helm and enacted a series of reforms over the following few years to establish the democratic institutions and legal structure under which the new government would operate. Of course, all of this progress did not come to pass peacefully – the late ‘70s and early 80’s were wrought with violence, from both right-wing and left-wing extremists including multiple attempts at a coup d’état.
The 1982 elections saw center-left party PSOE take power. But after almost 15 years and growing social unrest, center-right PP took the majority in 1996 with José María Aznar as president. Under his leadership, the Land Liberalization Law[1] was passed in 1998, making undeveloped natural areas available for urban development. The idea behind this law was that with more land available, there would be more opportunities for investment and construction. In turn, this would spur the construction of houses and drive the price of houses down, resulting in increased homeownership and a more affordable cost of living.
And so begins the infamous tale of the housing bubble: The new law did indeed stimulate construction and in one year Spain saw more new houses built than the UK, Italy, and Germany combined.[2] A labor reform law further aided construction – this law reduced worker rights but made a wealth of jobs available, which decreased unemployment, and theoretically increased the number of people who could then buy a house. However, things didn’t go exactly as planned.  Demand for houses increased more than anticipated so prices went up, but salaries had stagnated so the cost of living rose; however these working-class residents were the people who were supposed to be buying all of the new houses. The banks wanted to benefit from the housing market profits too, so in order to keep homeownership in the reaches of everyday Spaniards the banks doled out loans with relaxed credit requirements. These risky loans were justified because, of course, the price of property always increases so it’s a good investment.
With rising debt though, all of the players in this property game were borrowing more and more on the future with no real economic growth. As more and more homeowners were unable to pay their loans, they were evicted. With borrowers unable to pay, banks stopped lending money, investors stopped buying the debt and finally, following the US, the housing bubble burst in Spain in 2008. The collapse of the housing industry plunged Spain into one of its worst economic crises, with soaring unemployment, rising inflation, bank bailouts,[3] and more than 25% of newly constructed homes sitting vacant.[4] Subsequently, the government imposed austerity measures to cut debt, which included raising taxes. 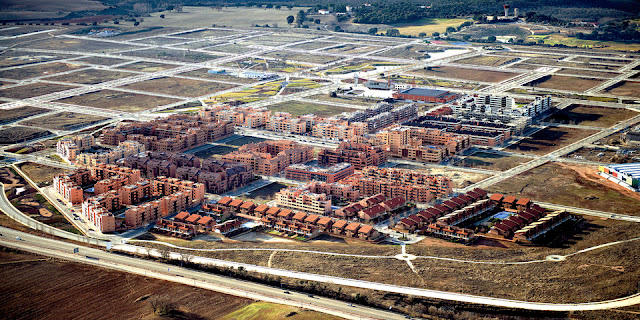 The start of a movement
The combination of rising prices from inflation, unemployment, and increased taxes have, not surprisingly, fueled incredible social unrest yet again. The unrest, though, is not just based on economic hardship; the grassroots citizen’s organization that emerged in early 2011, called Democracia Real YA! (Real Democracy Now!), asserts in their manifesto that corruption in the government and private sector is «an obstacle to human progress» and has left citizens voiceless and without real representation. They call for increased transparency and participatory processes in government to create «direct channels» to ensure rights to «housing, employment, culture, health, education, political participation, free personal development, and consumer rights» and for reform in the political and economic sphere that repositions public good over private benefit at citizens’ expense.[5]Critical of both PP and PSOE, los indignados assert that their needs are not represented by any of the political parties.
Citizen organizing was budding as a number of groups had been formed by los indignados and came to a head with protests in 2011 across the country ahead of municipal elections, most notably on May 15th. Protesters carried banners emblazoned with Democrocia Real YA´s motto of «No somos mercancías en manos de políticos y banqueros» meaning «We are not goods in the hands of politicians and bankers». The resultant movement, called 15M in reference to the date of the protest, continued as an encampment in Madrid’s Puerta del Sol, a plaza in the city center, for the following month with chants of sí se puede and numerous clashes with police, as well as other encampments and marches in numerous Spanish cities (Barcelona, Sevilla, Valencia, Zaragoza, etc.). Eventually, the movement devolved and continues today through 15M neighborhood assemblies and countless other groups of citizens demanding change and reclaiming their right to the city. 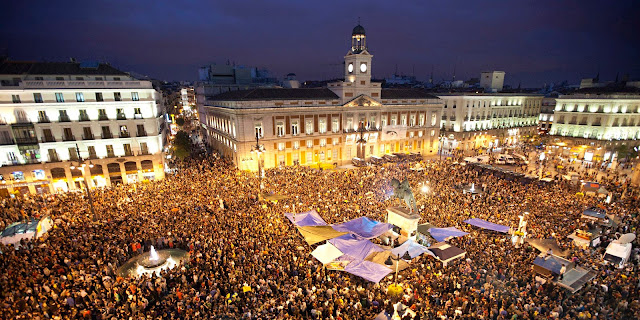 A new take on urbanism
Before the housing bubble burst, though, groups of architects had been growing critical of the construction trends. Rather than becoming accomplices in building houses on top of houses, they had an alternative take on urbanism – of thoughtful use of space driven by ecological considerations, open and democratic decision-making, and engagement of the users of space. In the late ‘90s and early aughts, groups of architects began forming collectives based on these values.
As the social movement grew following the economic collapse, they began to converge with the architecture collectives around a shared vision of public spaces, participatory processes, and sustainability. The proliferation of vacant lots and abandoned buildings resulting from the bursting of the housing bubble became the sites through which they organized and began making a new urban reality, activating spaces that were a drain on neighborhoods into assets that are accessible, empowering, and engaging for communities.
This new urban activism is, in some ways, reminiscent of las okupas: squatters motivated by political and social objectives who practiced autogestión (autonomous self-management), and occupied vacant dwellings starting in the ‘60s and surging in the ‘80s. While employing some old tactics, innovative strategies and methodologies are emerging as well that are turning the tide in urbanism to a new model. The coming posts will highlight this new model and provide examples of how activists are making their vision a reality in Madrid.
[1] http://www.boe.es/boe/dias/1998/04/14/pdfs/A12296-12304.pdf
[2] http://casastristes.org/content/burbuja-inmobiliaria-espa%C3%B1ola-y-su-relaci%C3%B3n-con-la-crisis-econ%C3%B3mica-actual
[3] http://www.ibtimes.co.uk/spain-recession-bailout-imf-eu-banks-368128
[4] http://www.elconfidencial.com/mercados/finanzas-personales/2008-08-28/mas-de-900-000-viviendas-construidas-en-los-anos-del-boom-inmobiliario-estan-vacias_804724/
[5] http://www.democraciarealya.es/manifiesto-comun/manifesto-english/