#HarineraZGZ: New models of urban management through the commons 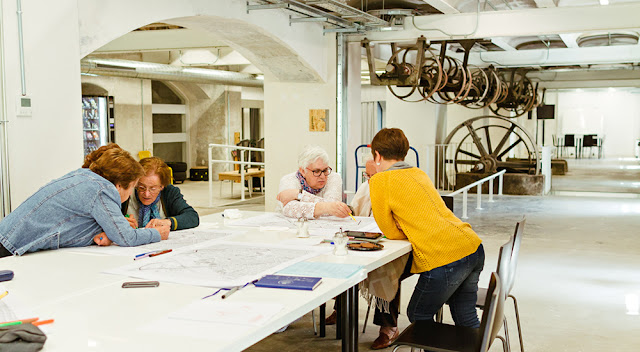 Between September and December 2014 Paisaje Transversal participated in the #HarineraZGZ process in Zaragoza, the capital city of the Aragon region in Spain. The project aims to create a participatory process to manage a new open and cultural space being the main goal to determine the management model for this new creative space set in Harinera, the emblematic industrial building located in the San Jose neighbourhood. The old factory was restored to provide the city with a new public cultural urban equipment to become a referent for already existing and future creative spaces. Citizen enrolment was key for the process, as the newly created space was conceived to achieve a community self-management status at some point.

When the project started in September 2014 as an effort to give a new use to the old Harinera, the building had been shut for several years. San José, located in the south side of Zaragoza, was traditionally an agriculture-based economy neighbourhood that was rapidly transformed into an industrial district. The Harinera building, is one of the few remaining examples -such as the Zaragozana beer factory- of the area´s industrial past. The building was completed in the XVIII century, at first it worked as mill and then it was used to process flour until its closure in 2011. Left unattended over time, many neighbourhood associations directed their efforts to provide the building with a second life as a creative space. This new cultural centre was conceived to boost civic participation and to empower urban transformation through creativity and culture.

The process followed some of the current trends in urban planning which revolve around the importance of granting a second use to the empty buildings in the urban structure by transforming them into new cultural nodes that improve citizen access to public cultural spaces. A project like  Harinera, is meant to contribute to the construction of a stronger public cultural scene in the city; to the construction of a network that will configure a system of creative spaces supported by community involvement; and to the construction of a space that can act as a referent in this field. The engagement of the community was crucial, since people tend to take care only for whatever they feel like their own. Therefore, making sure that citizens were part of the management and care of these new spaces would help to build communities deeply involved with the project in the upcoming years.

The project was born as an initiative by Zaragoza Cultural Association, a local commercial enterprise associated to Zaragoza´s City Hall. This association is dedicated to cultural activities, such as expositions, festivities, concerts or publications among others. Paisaje Transversal, with Elvira López, a local architect and Idema, a Zaragoza based company, were selected in a public contest to collaborate throughout the process of defining which management model would fit the initiative in the best way. The goal was to set up an action plan, that will lead the development of  #HarineraZGZ process.

The Zaragoza Cultural Association got involved in this project following the concerns of many neighbours from the San Jose area. Harinera was one of the numerous empty buildings in the neighbourhood, fact that motivated many local associations and neighbours to urge the local government into developing a conservation plan for this historical building. Simultaneously, they asked for the space to be provided with some sort of cultural use. Following these demands, on May 2014 the local government approved the first draft to provide a new life path for the Harinera. The document, written by Zaragoza Cultural, sketched the first concepts about the new cultural equipment to promote the increase of community participation in their neighbourhood and city transformation processes.

Paisaje Transversal and their collaborators worked initially to define the uses and activities that Harinera would host. It was important to detail a management model that would suit a space of these singular characteristics. In a parallel effort, through September of the same year, the physical renovation of the building started under the supervision of the architect Teófilo Martinez. 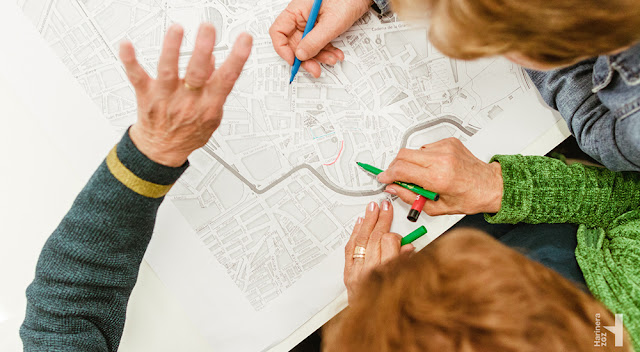 One of the decisive and distinctive aspects of the process was designing this management model based on citizen participation. Defining not only the most appropriate use for the space but figuring out the best way to operate this use within the space, was one of the main ambitions. In the early phases several meetings were arranged to establish a first contact between the neighbours and some of San Jose’s neighbourhood associations. Besides these exchanges, the meetings contributed to set up various social media profiles as it was vital to keep the project as visible as possible. To serve this purpose Facebook and Twitter profiles were created, since these ways of communication were crucial for allowing an easier way of participation and communication with any person interested on being part of the initiative. Besides the Facebook and Twitter profiles, a blog was created to provide another platform for further exposure to the process. Simultaneously, the early approaches with Cultural and Social Associations from Zaragoza occurred, more than 150 associations were contacted through email, and some meetings were hosted during the month of October. Among the representatives of these organizations, a diverse group of professionals was selected.
The meetings lasted throughout the entire process. Meanwhile, the strategy was configured under the starting concept that the project’s success deeply relied on the capacity to bring people’s attention and to encourage their involvement in the process. The project was structured through four fundamental instruments: participative workshops, two intersecting work lines, a core group and the different social media profiles.

The core group was configured mixing different social profiles and had the mission of driving and directing the process from the Citizens’ perception. Professionals related to the arts, photography, environmental protection, creative reusing, theatre, dance and urban art were selected with some of Zaragoza’s cultural agents and various representatives of the neighbourhood. This diverse core group helped to define the character of the new space and decided some of the main goals to be achieved. Weekly meetings were established as the easiest and most effective way to operate. These meetings were open, as the group itself, any person interested could get on board or leave at any time. The core group proved its efficiency crafting a participative process that became a key piece of the project. Citizen participation was fundamental to build a sense of community; the exchanges and the involvement of all these participants helped to walk away from personal interests in favour of a greater good.

Besides the core group, the participatory workshops were a fundamental instrument. During the entire process, three participative workshops took place with the goal of defining some key aspects of the future space and its management. Three entertaining as well as didactic activities were coordinated. These activities revolved around the same concept, citizen involvement, as the participative process was the only option to define the role of the space within the community.

The first of these workshops was Imaginacción (that would translate into something like imaginaction, this is imagination plus action) which versed about the character of Harinera. It focused on determining uses and options for the event calendar. Imaginacción was followed by Reciclacción (as before, a word game between recycle and action). The workshops were open to the public, trying to reinforce citizen engagement. During Reciclacción people were in contact with some appropriation of the space techniques. The activity concentrated on topics such as how citizens can use the space, how to configure it through creative actions and how to implement recycling and collaborative design to build stronger relationships in the community.

Last but not least, was the Jardinacción workshop (a word game between garden and action). This particularly one took place in the Jardin de la Memoria, The Garden Of Memory. The goal was to improve the quality of this green space using “do it yourself” techniques and creative recycling. It was organized collaboratively between Paisaje Transversal and Todo por la Praxis Collective. It was also the first activity run by the #ColectivoLlámaloH, name used to refer to the process that tried to define the uses and calendar of Harinera on social media. Jardinacción was a breaking point to achieve the self-community management of the space as soon as possible. 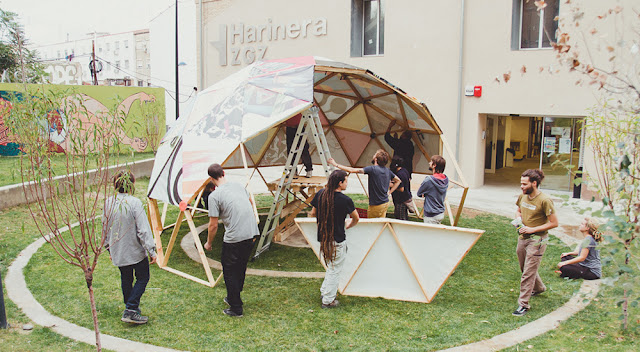 As abovementioned, the project was developed through two different working lines. The first focused on the management model developed by the agents of the core group. The timeline of the management model implied that the model would evolve to respond to the needs of the community, as they would change over time. The goal was to achieve a state of self-management where these needs would be answered based on the skills of the same community at all times. On the other hand, the second work line was based on broadcasting. It was crucial to assure the presence of the project in the media. The main idea was to set an example not just in Spain, but even in the international scene. It was fundamental to take advantage of the possibilities of the old industrial space and the opportunities of the participative process. However, any participatory process has limitations: it is a complex operation, that requires a huge effort; due to the fact that getting so many parties involved many times conclude in many back and forwards. At the same time, it is important to consider the ambitions that have driven this particularly project. #HarineraZGZ is a precursor process in Spain and it would be a good experiment to exemplify the possibilities and the weak spots for a self-management model run by the community.

To preserve at all times the distinctive character of Harinera, the boundaries of the management model were set up. Harinera will be a creative space differentiated from any other public equipment of the city. Its principles were established; first of all, the Harinera would be an equipment not just for the San Jose neighbourhood, but for the whole city. It would be a space for production and action; not a place just for theoretical thinking. Anyone could participate, no matter their background or their field of work. People would be vital in the space development that would make culture accessible to everyone as a first step to get people involved in transforming their society and environment. A last effort was taken to try to make a strong and independent collective that could work independently of the political parties elected for the local government.

This project is the outcome of the addition of many collective efforts. Harinera is the result of plenty of initiatives that have concluded in providing Zaragoza with a social based cultural space. The Harinera will reinforce the already existing cultural network in the city helping to build other community managed spaces. Harinera is the catalyst and its goal is to build a stronger social network though its participative process and encouraging people to get involved in the cultural scene breaking any social, generational or gender barriers.
Susana de Zarraga holds a Bachelor and Master of Architecture and Design from the Polytechnic University of Madrid. She has completed specializations in both, Conservation and Restoration of Architecture Heritage and Building Techniques and Technology fields. Currently, she works for a Manifold Architecture Studio, a Brooklyn based office
Paisaje Transversal is an Urban Planning and Urban Innovation Office.  We coordinate, design and advise innovative city and territory analysis through the core principles of transdisciplinarity, citizen engagement, urban ecology and digital tools exploit: http://paisajetransversal.com/

We are alvailable in english too!